Tottenham’s Mark Prince is set to challenge for his first Championship accolade, the vacant MBC International Cruiserweight title, since returning to the fray back in October last year, on the Shyam Batra SSE promoted CALL OF DUTY event, which takes place at York Hall in Bethnal Green, London on Saturday 2nd August.

Prince, whose record stands at 21 wins, 17 by way of KO, and just the one loss, has made a massive statement since returning to the pro ranks, following a fourteen year sabbatical, stopping both his most recent opponents.

Czech Republic’s Jindrich Velecky was the first to succumb to Prince’s power, when he was stopped in the fourth of six rounds last October, then on March 1st this year Olegs Lopajevs lasted just two minutes and twenty seconds of the first round.

These excellent wins earned Prince a well deserved shot at a title, the first for the former IBF and WBO Inter-Continental Light Heavyweight Champion since his only career loss, to long time WBO Light Heavyweight World Champion Dariusz Michalczewski back in 1998.

Co-main support sees Canning Town’s GEORGE ‘HIT HARD’ HILLYARD back in action, against Belfast’s TOMMY ‘THE TIGER’ TOLAN, in a six round contest.

Hillyard will be surely be going all out for victory, to keep his Championship dream alive, following the unexpected loss to Lithuania’s Kirill Psonko back in March.

Former England Amateur Captain ANTONIO COUNIHAN, against a yet to be named opponent, is the second co-main support.

Solihull’s Counihan comes into this fight off the back of three sensational victories. The first of which was a first class fourth round stoppage of the ubiquitous ‘Rockin’ Robin Deakin, followed by a shut out points victory over Poland’s Marcin Ficner and finally back in April a third round stoppage victory over Hungary’s Tibor Szucs.

The hugely popular Turkish brothers ONDER & SIAR OZGUL will be back in action, against yet to be named opponents.

The elder Ozgul brother, Onder, is a former member of the Turkish World Series Of Boxing squad, has just the two wins under his belt, the first a shut out points victory over Lithuania’s Dmitrij Kalinovskij, followed by a sensational first round stoppage victory over Brighton’s Iain Jackson.

I’m sure the next boxer up doesn’t need any introduction, Luton based American former Basketball star MANNY MUHAMMAD, due the press coverage of his heroic rescue of Reverend Mike Jones, who was trapped under a car following a road traffic accident, as well as his sensational against the odds debut victory over previously unbeaten prospect Vaidas Balciauskas.

Whilst fans of Women’s boxing will be mightily disappointed that TRAD TKO’s MARIANNE ‘GOLDEN GIRL’ MARSTON has had to pull out of her planned tilt at the World Boxing Union European Super Bantamweight title, against Hungary’s Marianna Gulyas, due to the injury that cost her the WBU European Featherweight title back in March flaring up again, however they will be pleased that there will still be a female bout on the card.

As making her most welcome return is JULIETTE WINTER, whose previous trip to the York Hall see her score a fantastic draw against Shanee Martin in their Fight Of The Year contending Battle Royale.

Finally making his pro debut on August 2nd is TRAD TKO’s exciting former Senegalese amateur star MATAR SAMBOU, who is highly rated by a certain Mr David Haye, after the aforementioned World Champion watched him in action in Africa a couple of years ago.

Mark Prince, versus a yet to be named opponent for the vacant MBC International Cruiserweight headlines the Shyam Batra SSE Promoted CALL OF DUTY event at York Hall in Bethnal Green, London on Saturday 2nd August 2014. 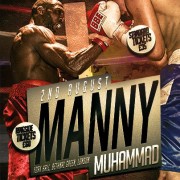