Kumbh Mela is a mass Hindu pilgrimage of faith in which Hindus gather to bathe in a sacred river to cleanse one of all sins. It is considered to be the largest peaceful gathering in the world where around 100 million people visited during Maha Kumbh Mela in Allahabad in 2013. On the dried-out parts of Ganges, one could forget the date, time and their own name; amazed and challenged to the deepest corners of their soul.
Boguslaw Maslak is a Polish-born, London-based photographer/filmmaker and Royal Photographic Society member. He spent 45 days at the festival documenting the event and directing his first film – a short-feature production titled “Supernovas”.
The exhibition “Pilgrims & Sadhus” is a collection of large-size photographs and videos presenting this rich and versatile feast of Indian culture. It is also an occasion to listen to Boguslaw Maslak’s stories and adventures experienced during his stay at the festival. Not only was he a photographer; he also acted as a banker mingling with the millions of pilgrims.
“Staying by the Ganges just before sunrise, surrounded by 40 million pilgrims taking bathe, I was united with the whole of mankind. I didn’t know it – I felt it.” 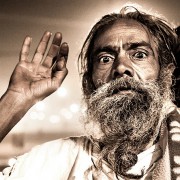 Due to the success of the exhibition we have added two additional dates over this weekend. 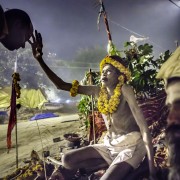