Back in the summer of 2012, the history books were well and truly rewritten, when Women’s Amateur Boxing was featured for the first time at the London 2012 Olympics.

Just one year later and once again the historians are going to get their quills sharpened, as the Capital City hosts the first ever British event to be headlined by a Women’s Professional Boxing World Championship bout.

Over the years, British Boxing fans have been more than a bit deprived of action featuring the fairer sex, yes there have been a few minor bouts, including a few featuring Areti Mastrodouka and of course Marianne Marston’s much heralded debut back in April, but that really is just about it.

But just like the famous London red buses, after you’ve spent an age waiting for one, three come along at the same time. That’s right Retzke-McKenzie may be headlining the Dave Murphy Acourtier Events promoted ‘Independence Day’, but that’s not the only female bout to feature on this extravaganza.

The aforementioned Marianne Marston will be back in action, against a yet to be named opponent.

Woolwich based Marianne will be looking to build on her sensational debut performance, where she stopped Hungarian #1 ranked Gabriella Roman in just one minute and forty seven seconds of the first round.

That’s not all, as a further Female bout has recently been added to the card, which features the welcome return to the ring of Salford, Lancashire’s unbeaten Featherweight Maxine McCarthy, following a two year sabbatical from the sport.

It’s not just the ladies in action, recently crowned WBU Lightweight World Champion Stephen ‘The Rock’ Ormond heads up the male portion of the show, as well as a trio of Irish lads taking part on the night.

Of the back of this superb win, Ormond was presented the opportunity to face Hungarian Laszio Robert Balogh for the vacant WBU crown.

On the 3rd May 2013, at the Carlton Hotel in Tyrrelstown, Dublin, on just his fourteenth pro outing Ormond stepped into the ring to face thirty three fight veteran Balogh.

Ormond utterly dominated the opening round, before going on to stop the Hungarian in just one minute and fifty four seconds of the second stanza.

Joining his esteemed countryman on July 5th is Irish Light Middleweight Lee Murtagh who, even though he has fought the majority of his fifty career fights in the UK, will be making his first visit to the famous home of boxing in the Capital, as preparation for his upcoming IBO Inter-Continental title battle.

The final Irish boxer on the show is Steve Collins, no not the legendary two time, two division World Champion, but his son Steve Jr, who will be making his professional debut.

On July 5th, local boxing fans will finally get the chance to see former Fitzroy Lodge amateur star, Lewisham’s Jovan ‘YoungStar’ Young in action, as a pro, for the first time.

Jovan has built himself quite a reputation since turning pro last year, instead of going the standard route, the twenty five year old Light Heavyweight chose to travel to Uraguay and America for his first five bouts.

The big hitting YoungStar stopped his first three opponents, beat on points his fourth and was cruelly denied a certain fifth victory, after some good old fashioned home cooking see him earn a draw on his fifth outing, even though he had won every single round with ease!

Unbeaten Danish star Osama Hadifi also makes his British debut on July 5th, like Jovan, Osama has built up quite a reputation, as a knockout artist. The big punching twenty seven year old from Copenhagen has had six pro outings to date, winning them all by first round stoppage.

During his thirty nine fight career, Ryan regularly secured silverware for his trophy cabinet at Featherweight, Super Feather and Lightweight, however on July 5th he will be campaigning at Welterweight for the first time.

Finally, making their professional debut are two highly decorated former amateur stars, both of whom are being touted as future World Champions.

The first is Team GB star Antonio Counihan, from Birmingham. A truly exciting young prospect who has not only amassed numerous national and international accolades over the past few seasons, but also was captain of the England squad for some fifteen international competitions.

The second is London based Turkish amateur superstar Shiya Ozgul. Just nineteen years of age Shiya has built up a serious reputation of being ‘one to watch’.

As I said Shiya is just nineteen, yet in his career to date has fought just over a hundred amateur bouts, around half being full internationals, winning an incredible ninety five of them. 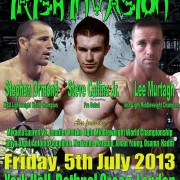 Whilst most people would automatically associate ‘Independence Day’ as an American celebration, they might have to think again if they are going to attend the Dave Murphy, in association with Acourtier Events promoted ‘Independence Day’ extravaganza at York Hall, London on Friday 5th July, as whilst yes there will be Americans fighting on the bill, by far the largest contingent is going to be Irish.